Described as an affectionate and playful cat, Flossie was born on the streets of England in 1995. Flossie took its place in the Guinness Book of Records as the longest-living cat and became immortal. Flossie’s record was confirmed at 26 years 316 days on November 10.

Born and later adopted in a cat colony in Merseyside, England, Flossie lives in Orpington, London, with her current owner, Vicki Green.

“I knew all along that Flossie was a special cat, but I didn’t think I would share my home with a Guinness World Record holder,” says Green, Flossie’s owner. “She’s so loving and playful, especially sweet when you remember how old she is. She is deaf and has poor eyesight, but none of that seems to bother her.” she continues.

Flossie is currently the oldest confirmed cat inside and is at least 120 years old to human age.

Toxoplasma, an intracellular parasitic protozoan, is carried globally by a considerable proportion of the human population. So how does Toxoplasma spread within the body or how does it reach the brain?

Studies on how Toxoplasma protozoa spread within the body are continuing. One of them was recently published in the journal Cell Host & Microbe (IF=31.316, JCR Ranking Q1). Researchers shared the question and answer in the title of the article with the scientific world.

It is known that the roles of immune cells in the fight against infections are tightly regulated. It is important to illuminate how Toxoplasma has managed to infect so many human and animal species and spread so efficiently. At this point, Ten Hoeve and his team stated that they had found an answer. The key element of this response was the discovery of a protein. Researchers have identified a protein (GRA28) that Toxoplasma uses to reprogram the immune system.

The disease caused by toxoplasma is defined as toxoplasmosis and is one of the most common parasitic infections in humans worldwide, perhaps the most common. WHO estimates that at least 30% of the world’s human population are carriers of the parasite.

Domestic cats (not just domestic cats, but all felines) occupy a special place in the life cycle of Toxoplasma: sexual reproduction takes place only in the cat’s gut. Reproduction in other hosts, for example, humans, dogs, or birds, takes place by parasite division. At this point, the one health concept to fight the disease is important. Therefore, veterinarians play an important role in the detection, prevention, and treatment processes of both infected cats and cats in the final host role. This directly affects human health.

Toxoplasma (Toxoplasma gondii) infection is common in cats, but the clinical picture is rare. Up to 50% of cats, especially free-range ones, have antibodies that indicate infection and the presence of cystic stages. Clinical signs usually occur when cats are immunocompromised – in these cases, the cystic stages can be reactivated. Commonly affected organs are the central nervous system, muscles, lungs, and eyes. When cats shed oocysts, they can pose a risk to humans. However, this only happens once in their lifetime, usually for three to ten days after tissue cysts have been ingested.

Toxoplasma is transmitted to humans through food and contact with cats. In nature, the parasite spreads preferentially from rodents to cats, rodents, and the like. The parasites are “dormant” in the rodent’s brain, and when the cat eats the mouse, they multiply in the cat’s gut and are expelled through the feces. The parasite terminates in the vegetation and becomes infected when the rodent eats the vegetation. It is transmitted to humans through the consumption of meat or contact with cats, especially cat feces.

The disease caused by toxoplasmosis is defined as toxoplasmosis. When a person is first infected, they show symptoms similar to a cold or flu. After the initial infection stage, the parasite enters the “sleeping” stage in the brain and begins a chronic, silent infection that can last for decades or a lifetime. Chronic infection usually does not cause symptoms in healthy individuals. However, toxoplasma can cause a life-threatening brain infection (encephalitis) in people with compromised immune systems (HIV, transplant recipients, post-chemotherapy) and can be dangerous to the fetus during pregnancy. Eye infections can occur in healthy individuals.

Our students, who started their veterinary profession training at the Near East University Faculty of Veterinary Medicine in the fall term of 2022, took their first steps into the profession by wearing their white coats.

In addition to the academic staff of our faculty, the precious families and loved ones of our students participate and showed their interest, which was held with enthusiasm. Thus, our students took an important step towards gaining a sense of belonging in terms of being a member of the Veterinary Medicine family, to be the new veterinarians.

At the ceremony, our dean Prof. Dr. Deniz Seyrek İntaş explained the importance of the white coat, which is the symbol of medicine, with her speech. prof. In his speech, D. Seyrek İntaş said, “The white coat is a symbol of medicine. While some subjects are taught with experiences and proofs, some subjects are expressed with symbols silently. The crescent and star in the Turkish Veterinary Medicine emblem symbolize Turkish Veterinary Medicine, the viper symbolizes health, and the burning torch symbolizes brightness and civilization. White color symbolizes purity and cleanliness perfection. Now, as the veterinarians of the future, you will promise the same purity and cleanliness by wearing your aprons and reading the current version of the Hippocratic oath 2,500 years ago. This apron will always be with you throughout your professional life. I believe that after graduating from Near East University, each of you will be a research-oriented, knowledgeable, confident, and successful physician. Welcome back to our island and our university.”.

After our dean, Melisa Ünal spoke on behalf of our students and said, “On behalf of all my fellow students, I promise that we will lend a helping hand to all animals, become active physicians with the work we will do, and undertake important duties in animal rights.”.

After the speeches, our students were dressed in aprons by our academicians, and we are glad that we were able to share in this joy.

After the process of putting on the aprons of all our students was completed, the professional oath was read and thus the first step into the profession was taken.

We congratulate our students and wish them success.

Investigating the origin of humanity is one of the primary fields of study of scientists. Groundbreaking with his work in this field, Svante Pääbo achieved many seemingly impossible feats and was awarded the 2022 Nobel Prize in Physiology or Medicine.

Pääbo fully revealed the genome of the extinct Neanderthal (Homo neanderthalensis), as well as the sensational discovery of a previously unknown hominin, Denisovan (Denisova hominins). Furthermore, Pääbo discovered that gene transfer from these extinct hominins to modern humans (Homo sapiens) occurred around 70,000 years ago after migration from Africa. It was these studies that brought Pääbo the Nobel Prize.

Pääbo’s discoveries revolutionised our understanding of human evolution. At the time Homo sapiens migrated from Africa, Eurasia was home to at least two extinct hominin populations. Neanderthals lived in western Eurasia, while Denisovans lived in the continent’s east. It was discovered that during Homo sapiens’ expansion and eastward migration out of Africa, they met and interbred not only with Neanderthals but also with Denisovans. Pääbo’s findings have provided us with the knowledge that ancient gene sequences from our extinct ancestors had an impact on the physiology of modern humans. It is known, for example, that the EPAS1 gene, which provides high-altitude survival advantage and is common among Tibetans today, has Denisovan ancestry. Another example is genes inherited from Neanderthals that influence modern humans’ immune responses to various types of infections.

Pääbo’s research gave rise to a new scientific field known as paleogenomics. Paleogenomics is a branch of science concerned with the reconstruction and analysis of genomic data from extinct species. This discipline essentially seeks to answer the questions of what genetic differences distinguish modern humans from extinct hominins and what distinguishes modern humans.

Homo sapiens is distinguished by its unique ability to create complex cultures, advanced innovation and creativity, and the ability to cross open waters and spread across our planet. Neanderthals were also social creatures with large brains. Despite they have the ability to use tools, they have changed little over hundreds of thousands of years. Pääbo’s research revealed genetic differences between Homo sapiens and our closest extinct relatives. Research in this area is ongoing, and gaps in understanding what makes modern humans unique are being filled.

The “Current Approaches in Equine Medicine Symposium” organized by the Cyprus International Veterinary Students’ Union was held at the Faculty of Veterinary Medicine of Near East University with intense participation.

Horses are among the animals that have an important place in the history of the world. They have always been on the side of people in many fields from war to travel, from freight transportation to agriculture. Today, horse breeding and equestrianism are still the passions of enthusiasts. Equine medicine continues to be one of the important fields of veterinary judgement.

Everything about equine medicine was discussed in 6 sessions. In the second session, chaired and moderated by Assoc. Prof. Dr. Serkan Sayıner, Dean of Istanbul University Cerrahpaşa Faculty of Veterinary Medicine and Prof. Dr. Güven Kaşıkçı from Obstetrics and Gynecology Department. made their presentation titled “Blood Incompatibility in Mares During Pregnancy”. Prof. Dr. Kaşıkçı gave detailed information about the formation of a foal, its growth in the womb and possible problems after birth.

Serkan Sayıner, DVM PhD. Assoc. Prof. took part as an invited speaker at the seminar on “Leishmaniasis in Dogs” organized by One Health Cyprus on February 26th, 2022.

The seminar on “Leishmaniasis in Dogs”, which brings together veterinarians carrying out animal health services on both sides of the island of Cyprus, was held at the Home For Co-operation. During the seminar, up-to-date information, and experiences on the issue, which affects the dog population on the island and is also important for public health, were shared.

In his presentation titled “Canine Leishmaniosis: Laboratory Markers in Diagnosis and Monitoring”, Dr. Sayiner gave information about the physiopathology of the disease and its projection, the markers used in the diagnosis and monitoring of the disease and treatment, and their evaluations. At the seminar, Prof. Dr. Gaetano Oliva from the Faculty of Veterinary Medicine at the University of Naples., and Dr. Vasiliki Christodoulou from Southern Cyprus Veterinary Services provided up-to-date information on the transmission routes of the disease, its epidemiology, diagnosis, prevention and vaccine effectiveness. In addition, in the seminar where the possibilities of working together were discussed, data on the spread of the disease on the island was shared.

I would like to thank the One Health Cyprus organisation for inviting me to this event, which I think was very enjoyable and beneficial. 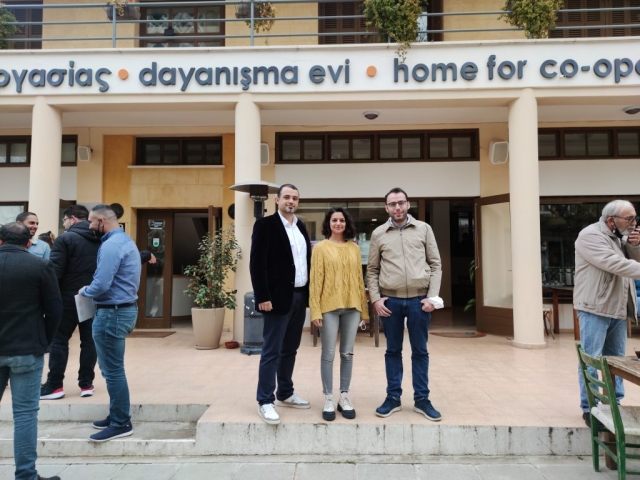 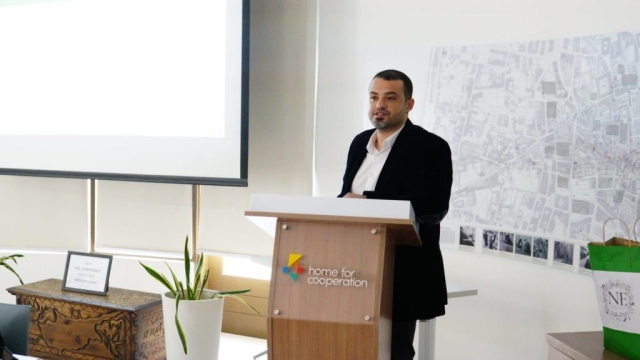 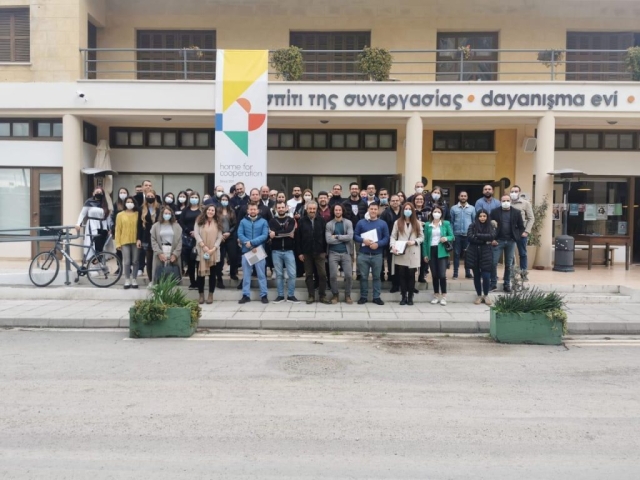 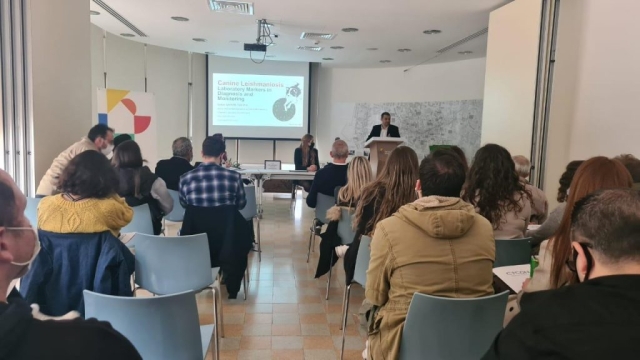 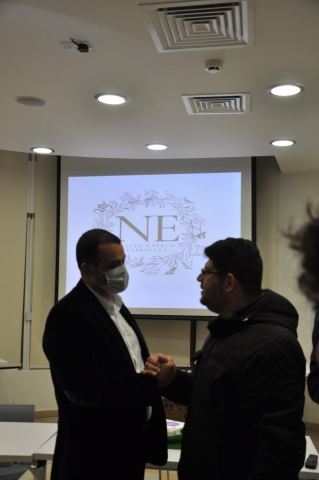 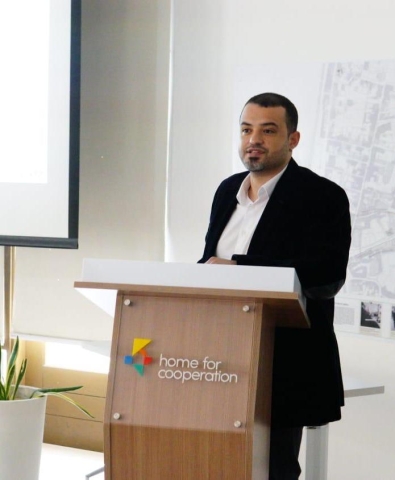 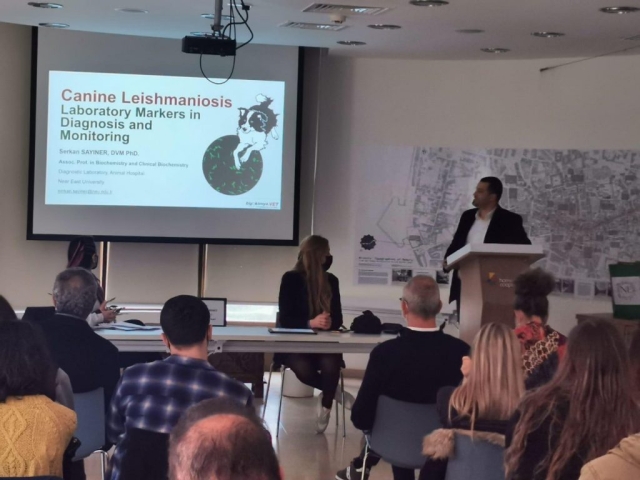 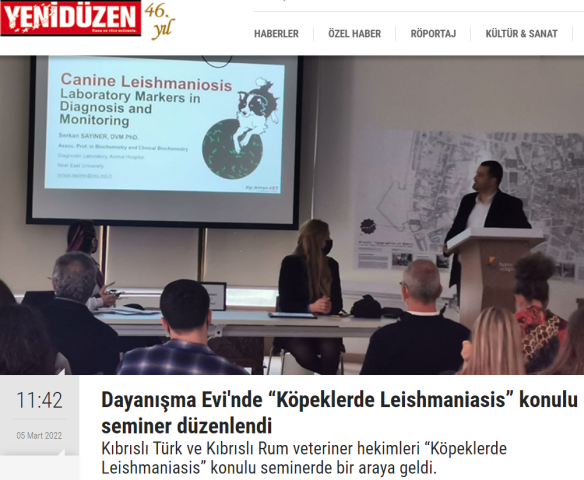 The review article entitled “Current Knowledge on Tumour Markers in Veterinary Oncology”, in which Gamze Bilgili is the lead author, one of our NEU Faculty of Veterinary Medicine students was published in the journal “AS ​​Veterinary Sciences (ISSN: 2582-3183)”.

We aimed to compile and present tumour markers that have been evaluated and are being studied in veterinary medicine.

Tumour markers are molecules that are produced by tumour cells or an organism in response to the presence of a tumour. These molecules can be found in blood, urine, tissues, and body fluids, and blood levels are the most commonly tested. Tumour markers are particularly useful in aiding diagnosis, assessing disease progression, and monitoring treatment.

Tumour markers are an exciting field of study for both veterinary and human medicine. We hope our article will be beneficial.